The Trinidad & Tobago Rugby Union (TTRU) will be represented by four (4) National Teams at the upcoming Rugby Americas North (RAN) Super Sevens Tournament – Senior Men’s, Senior Women’s, Men’s Under 18 and Women’s Under 18 7s Teams. This tournament will take place in Mexico City, Mexico from November 11 to 13, 2022, where both Senior and Age-Grade Teams will compete. This will be the first year that the Under 18 Teams will be competing at the event.

The RAN Super Sevens will serve as the qualifying event for the 2023 Central American & Caribbean Games (CASCO), 2023 Pan American Games and the 2023 World Rugby Challenger Series for the Senior Teams. This tournament will also provide valuable game experience for the Under 18 Teams as they prepare for the 2023 Commonwealth Youth Games, to be hosted by Trinidad and Tobago in August 2023.

Originally scheduled for February 2023, the RAN Super Sevens was postponed due to the uncertainty which continued to affect the region coming out of the COVID-19 pandemic. None-the-less, the TTRU has been able to regroup to ensure athletes the opportunity to participate at both local and regional events in preparation of the tournament.

Speaking on behalf of the TTRU, President, Maria Thomas explained that while there were many challenges coming out of the pandemic, the various teams have competed well when given the opportunity and have grown from strength to strength over the past year. “We commend the athletes and technical teams for the dedication they have shown over the past year, despite the obstacles they might have faced. We have seen tremendous growth within the teams who have maintained consistent training since last year, to prepare for this event. We look forward to seeing our National 7s Teams showcase their hard work in Mexico City.”

Thomas also thanked The Sport Company of Trinidad & Tobago (SporTT) for making it possible for the teams to attend three regional events this year, as well as this one. “We need to thank SporTT for their support of the Union over the past year. The economic climate has impacted our community and the opportunities we have been afforded towards the development and preparation of our National Teams would not have been accessible without the support we receive from SporTT.”

This will be the first outing for Men’s Under 18 Team, while the Women’s Under 18 Team had the opportunity to compete together at the St Lucia International Carnival Rugby 7s Tournament in August 2022. The Senior Teams will hope to improve on their performances from the last RAN Sevens held in April 2022 in the Bahamas. The Women are seeking another podium finish while the Men are determined to improve from their 7th place finish.

Kyle Strachan, Coach of the Women’s Under 18 7s Team – “We started training since last October and we got playing time in St. Lucia for the St Lucia 7s, as well as locally in the Ruggerama Tournaments, so I think we will compete well at the tournament. The girls have shown a lot of progress in both technical and tactical skills. The players have shown a lot of growth over the past few months especially since starting to play against the Senior Women. We have seen the progress from match to match and they have improved drastically.”

Richard Staglon, Coach of the Senior Women’s 7s Team – “I think the preparation has been good. The girls are reacting really well to training and there has been significant improvement in their ball handling skills. They are a lot more strategic as a team and I am confident we can make the finals.”

Larry Mendez, Coach of the Men’s Under 18 7s Team – “Most of this team would have had the experience of playing 15s in Jamaica in July, so it was trying to now convert them to playing 7s which is a totally different game requiring more fitness, better ball handling, all round skill and better knowledge of the game. They have really come a long way, with support from the Elite Athlete Wellbeing Unit (EAWU) at SporTT and now we just have a couple of practice tournaments to help put our game together.”

Felician Guerra, Coach of the Senior Men’s 7s Team – “The team has shown steady progress throughout the preparation for the tournament. The team selected has a good balance of experience and youthful exuberance. Over the coming weeks we will be fine tuning the team’s chemistry and working on team specific game plans. My only request is that they make themselves proud and let the sacrifices they have made be honored with their performance.” 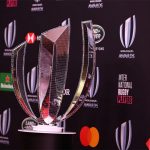 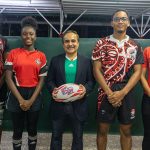